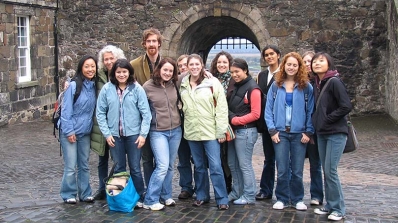 To major in English, you'll need to satisfy major distribution requirements and choose a concentration area. Learn more about the English major, modified major, and minor.

With an emphasis on communication and critical thinking, courses in Dartmouth's English and Creative Writing Department complement a variety of majors. If you are interested in taking English courses, regardless of your major, consult our Courses or the ORC for a full listing.

Majoring in English instructs you in critical modes of thinking that are beneficial in almost any future career path.

A corollary set of intellectual skills developed in the Dartmouth English major is a knowing deployment of a sophisticated critical vocabulary. All English majors will soon be required to take a course in literary theory. By focusing on major theoretical schools of the twentieth century--such as structuralism, post-structuralism, feminism, Marxism, deconstruction, queer theory, psychoanalysis, and post-colonialism--an English major learns how to integrate an array of demanding analytic paradigms. These acquired skills enhance your abilities to critique from a variety of perspectives a variety of texts, ranging from Old English elegies and Renaissance plays to Trinidadian memoirs and digital hypertexts.

Writing is of paramount importance to the English major. Typically, you write at least two long papers in every English course, and in your senior seminar, the capstone course to the major, a hefty research paper is required. About 25 percent of majors choose to write an honors thesis. Though lengths may vary, particularly for creative projects, theses are generally between 60 and 90 pages long. And in the popular major in literature and creative writing, you take a series of seminars that culminate in a portfolio of poems, short stories, non-fictional prose, or a novel. Since clear, intelligent, and personable writing is a skill highly valued in the world after college, its development under the tutelage of attentive professors is another benefit of majoring in English.

In recent years, approximately 100 members of each Dartmouth senior class have graduated as English majors: Some continue their study of literature in graduate school; others prepare to teach English in secondary schools; others become journalists, writers, and editors; and many go on to law school and medical school. As an English major, you may want to apply for our foreign study program, take creative writing as a concentration within the major, or write an honors thesis under the guidance of a faculty member.

You'll also have many opportunities to participate in programs and discussions, including readings by nationally known poets, novelists, and critics that are scheduled at Sanborn House throughout the year. Stay up to date on these and other Department events by monitoring the Department's events page.