Posted on September 29, 2022 by Agatha Bordonaro

English and creative writing professor Joshua Bennett's new book, The Study of Human Life, explores universal themes of death, resurrection, and new beginnings. In a Q&A, he reflects on the genesis of the book and the related television series in the works—plus his new installation at the New York Botanical Garden.

Growing up in the '90s in Yonkers, N.Y., Joshua Bennett was keenly aware of the preciousness of human life.

"I was raised in a community where young men died all the time," he says. "I grew up around altars in the street, teenage boys with their friends' faces screen-printed onto T-shirts. So at every major milestone of my life now, I feel a sense of both astonishment and deep gratitude."

When Bennett learned in 2020 that he would become a father, he became deeply focused on themes of parenthood and new beginnings. His journal entries, inspired by his son in utero, evolved into the culminating section of The Study of Human Life, a three-part collection of poetry and prose that meditates on what it means to be human.

The recipient of fellowships and awards from the Guggenheim Foundation, the Whiting Foundation, the National Endowment for the Arts, and the Society of Fellows at Harvard University, Bennett is the author of three additional books, including The Sobbing School (2016), which was a National Poetry Series selection and a finalist for an NAACP Image Award.

Bennett is currently adapting the central section of The Study of Human Life, "The Book of Mycah", into a television series with Warner Bros. Television Studios and Hillman Grad Productions, the media company founded by Emmy-winning actor, writer, and producer Lena Waithe.

In a recent conversation, Bennett filled us in on the genesis of The Study of Human Life, his new installation at the New York Botanical Garden, and two books in the pipeline.

The first section of The Study of Human Life features a set of autobiographical poems related to themes of youth, vulnerability, and death. The second part, "The Book of Mycah," combines poetry and prose in the story of a 16-year-old boy who comes back from the dead. And the third section, "Dad Poems," looks ahead amid the joys and surprises of new parenthood. How did these sections come together?

It began as a series of journal entries, believe it or not. I had set out to catalog the experience of becoming a father, starting with my discovery of the BabyCenter app. The app is meant to document your child's growth, and in doing so compares them to a sequence of fruits and vegetables (kumquat, peapod, squash, that sort of thing). After a few weeks of using it, I remember thinking "Maybe I should start documenting these moments."

Then, to my surprise, I wasn't allowed in the hospital during my son's first ultrasound. This was due, of course, to the hospital's pandemic protocols in early 2020. But no one informed me or my wife, Pam, of the policy change in advance of our visit. That week, the journal entries began turning into poems. The writing sessions transformed from ones concerned with straightforward documentation, to time set aside for invention, confession, and a very different sort of narrative vision. These writings eventually became a sequence entitled "Dad Poem" that makes up the third section of the book.

Around the same time that I was writing those poems, I was thinking about adapting an older poem of mine, "The Book of Mycah"—which was in my second collection, Owed—into another form. I thought, "What would it look like to build a whole world around this character that I've established here?" It started as a screenplay. Then it was a novella. That novella ultimately became the second section of the book.

The first section of the book is titled "Trash." The phrase itself was a major part of my vernacular growing up in and around NYC. Just about any object or experience could potentially be described as "trash." Which, I thought, made it an interesting piece of language to trace. Not just "trash" as a descriptor of anything you disliked or that ruined a given moment, but actual garbage, practices of disposal, junk food, the threat of being cast away as if you were worthless. I began thinking about the Civil Rights movement, and the Memphis Sanitation Strike in 1968. From there, trash as a central metaphor continued to unfold.

At a certain point, I realized I was writing a book in reverse. I had this drama in three acts: First, I had the focus on death and disposability in "Trash"; then there was "The Book of Mycah," which is about a 16-year-old boy who comes back from the dead, so I had resurrection there; then this third sequence about my son, August Galileo, coming into the world, and that unfettered celebration of new life. I combined the three sections, and that was the first draft of The Study of Human Life.

Is there an overarching theme or message that you hope readers will come away with?

That life is worth it. In all my recent work, there's an overarching theme of celebration in the face of great difficulty, of a meditative tenacity that doesn't just make challenging circumstances livable, but helps you find reasons to go on.

During the past two years, I've had to be more thoughtful about where I devote my energy. Becoming a parent clarified how much time I spent on things that really did not matter that much.

The pandemic meant I couldn't go anywhere. I had to sit with myself. I had to regularly check in with my parents and my big sister and my nieces and nephews. I had to think about my role in my family and in my local community—what I wanted to contribute, to mean, to the lives of the people around me.

What are you working on now?

I'm adapting "The Book of Mycah" into a television series. I just got a development deal from Warner Bros. Television a couple of weeks ago. It started as a screenplay, became a novella, and now it's a screenplay again. I think it had to go through that process for me to understand the other voices besides Mycah, the protagonist, that were involved. Lena Waithe and Rishi Rajani will serve as executive producers. 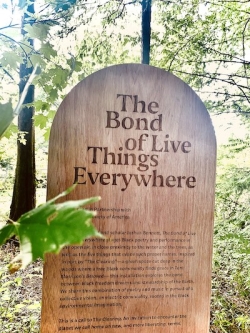 I have an installation up at the New York Botanical Garden: "The Bond of Live Things Everywhere." It's a celebration of black nature poetry. We'll have poems and songs coming out from the trees, poems carved in maple that you can read with the pond as your backdrop. We'll have live music, performances, and a dance party on Daffodil Hill. That runs from Sept. 17 to Nov. 6.

Then I have two other books coming out in March 2023. One is Spoken Word: A Cultural History, a nonfiction book about spoken-word poetry in the United States. The second is called Minor Notes: Volume 1, and it's an anthology of minor poets in the Black expressive tradition that I'm working on with my friend and colleague at Harvard, Jesse McCarthy.