“Being Property Once Myself” reframes classic works by Black American writers. 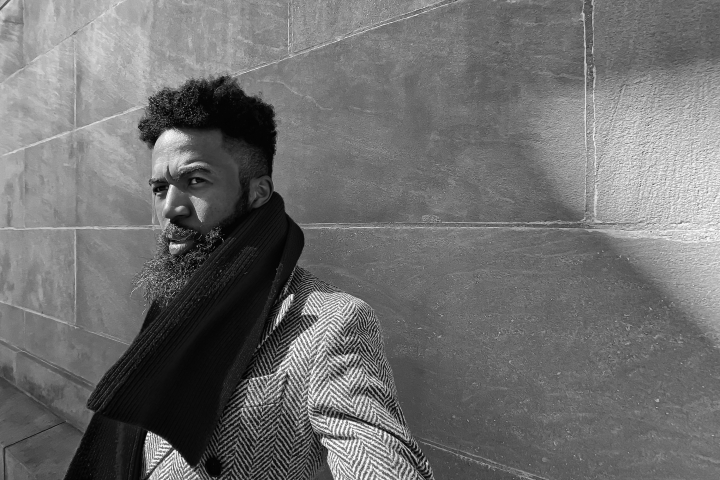 Joshua Bennett, a professor of English and Creative Writing, award-winning poet, and scholar of African American literature, has won the Modern Language Association’s William Sanders Scarborough Prize for Being Property Once Myself: Blackness and the End of Man, his first book of literary criticism.

The prize is awarded annually for an outstanding scholarly study of Black American literature or culture. The announcement comes just months after Bennett was awarded a Guggenheim Fellowship and won a Whiting Award for poetry and nonfiction.

He was astonished to learn of the MLA prize, Bennett says. “The legacy of people who have won this award, and the finalists for it, it’s truly an honor to be in their company.”

Being Property Once Myself, which tracks animal figures in the writing of Richard Wright, Toni Morrison, Zora Neale Hurston, Jesmyn Ward, and Robert Hayden, is “brilliant in its approach and gorgeous in its prose,” the MLA writes.

The book uses conceptual frames from ecological criticism—which studies the relationship between literature and the natural environment—and animal studies to recast and reinterpret the African American literary imagination, the MLA writes. “What emerges from this approach is a creative, elegant, and compelling study of the intersections among ecology, the human animal, and the nonhuman animal as sites of thinking.”

Bennett says he hopes readers will come away with a sense that Black ecological consciousness has always been at the center of Black literature and Black cultural practice, something he began intuiting as a little boy, listening to his grandmother tell stories about her life.

“Our historical practice of reading those texts has been contaminated by the pernicious lie that whenever Black people and animals are in the same frame, it always has to be in service of a certain kind of dehumanization,” he says. “What I’m saying is that Black people historically have turned to animals as ways also of thinking about freedom and flight and kinship.”

The book grew out of Bennett’s dissertation at Princeton, and was shaped by a meeting with his favorite living author, Stanford University professor emeritus Sylvia Wynter.

Bennett and his friend Harvard professor Jarvis Givens were interviewing Wynter for the journal “Souls,” when she asked each of them about their work.

Black people historically have turned to animals as ways also of thinking about freedom and flight and kinship.

They talked about origin stories and the need to tell a different origin story of humanity, and also, perhaps, of Black studies, Bennett says. Wynter’s capacious perspective helped him reconceptualize what he was doing with his work on animals, that “in some ways, I was trying to say that this was perhaps a new origin story for the way we think about Black literary study.”

Bennett described his meeting with Wynter as one of the great moments of his life.

“I’m hard pressed to think of someone else who has had more of an impact on my thinking, aside from my teachers and family,” he says. “So, I’m thankful as always for her witness and her kindness and generosity.”

‘I Wanted It to Sing’

Bennett says he considers the book a product of the care and stewardship of his colleagues in the English Department and the Program in African and African-American Studies. “It’s made all the difference to have not just colleagues, but friends, people who have supported me.”

Being Property Once Myself also carries echoes from Bennett’s childhood. As he wrote, Bennett hoped to evoke the atmosphere of Christmas gatherings at his grandmother’s house in South Bronx, where each year the children performed poetry, songs, or dances, one of the many ways his family encouraged and celebrated self-expression and social connection.

“I wanted the prose to even approach the beauty of those evenings,” says Bennett, who dedicated the volume to his late grandmother, Charlotte Elizabeth Ballard. “I wanted it to sing.”

Ballard, who he credits for his commitment to ecological criticism, taught him to “think of folktales and poems as instruments for understanding the world and who we were in it,” he says, “It’s a great gift she gave to me.”

Now on his Guggenheim Fellowship year, Bennett is currently finishing a book of poetry, The Study of Human Life, which will be published in 2022.