Please join the Department of English and Creative Writing for a reading by Jacinda Townsend. 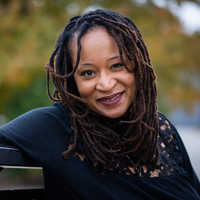 The English and Creative Writing Department invites you to the Cleopatra Mathis Poetry and Prose Series on Thursday, September 29, with a reading by Jacinda Townsend. The event will start at 4:45 p.m. in Sanborn Library. Email english.department@dartmouth.edu with quesitons or access needs.

Jacinda Townsend grew up in Southcentral Kentucky and left for Harvard at the age of sixteen. It was there that she took her first creative writing classes; while at Duke Law School, she cross-registered in the English department, where she took her next few formative writing workshops. After four years of being first a broadcast journalist and then an antitrust lawyer in New York City, Jacinda went to the Iowa Writers’ Workshop, where she received her MFA before going on to spend a year as a Fulbright fellow to Côte d’Ivoire.

During her Fulbright year, on a layover in Morocco, Jacinda discovered the city of Marrakech and fell in love. Later that same year, on a trip to Northern Mali, she also first witnessed modern-day slavery: that incident inspired the research that eventually took her to Mauritania, where she met with escaped slaves and anti-slavery activists and began the work that would become her novel, Mother Country, published by Graywolf Press in 2022. Mother Country is told in the voices of an American woman struggling with infertility who kidnaps a young Moroccan girl, and the young mother, escaped from Mauritanian slavery, who loses her.

Jacinda is also the author of Saint Monkey (Norton, 2014), which is set in 1950’s Eastern Kentucky and is a love letter to a Black community that has all but disappeared. Saint Monkey won the 2015 Janet Heidinger Kafka Prize for best fiction written by a woman and the James Fenimore Cooper Prize for that year’s best historical fiction. Saint Monkey was also the 2015 Honor Book of the Black Caucus of the American Library Association.

Jacinda's third novel, James Loves Ruth, is told in the voices of Ruth Hurley, who changed her identity and moved across the country after her father was killed by a police officer in the late eighties, and James Hurley, her soon-to-be-ex-husband, who spends the novel uncovering the truth about his wife's previous identity. Excerpts from the novel have appeared in Auburn Avenue, Copper Nickel, Still, and Transition. Jacinda is the Helen Zell Visiting Professor in Fiction at the University of Michigan, and is mom to two magnificent children who amaze her daily.

Events are free and open to the public unless otherwise noted.